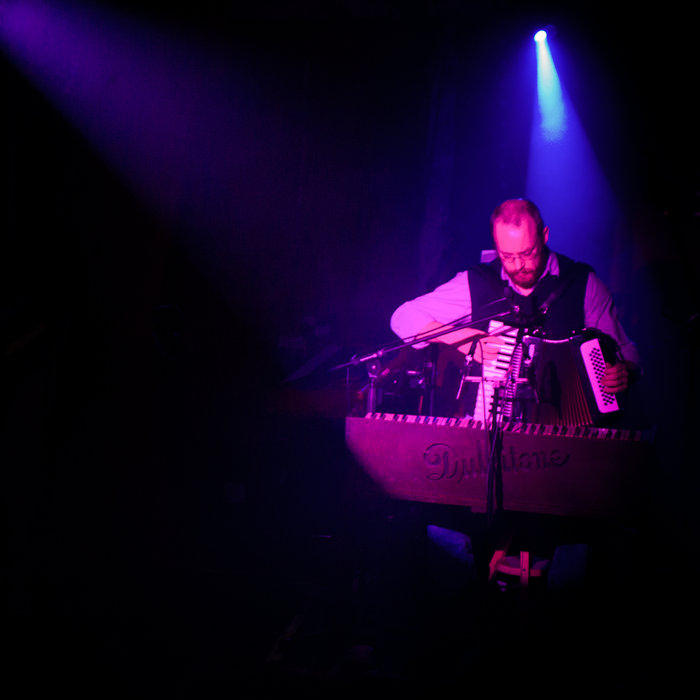 Darlin’ Cora​ and ​Cosmos​ are pieces drawn from the worlds of folk and jazz music respectively — the former a widely-performed Appalachian folk composition and the latter, a number from John Coltrane’s canon, first performed in 1965, as he transitioned toward a more avant-garde style of expression. ​Mechanica​ and Wooden House​ are improvisations on the Dulcitone and toy piano respectively: instruments that were hand-prepared by the Cheshire-based musician, whose presence as a pianist and organ player in Manchester’s jazz scene have seen him work with Nat Birchall, The Revival Room and many others.

When Fairhall first approaches an instrument of this sort, his hope is that it will gradually suggest a unique musical vocabulary. While his decades spent studying the totality of jazz piano have equipped him with a skillset that transcends the concert grand, it is his free improvising and ethnomusicological interests that dictate these formative musical encounters. The tones coaxed from each instrument imply sonic connections to disparate styles of traditional music, encouraging him to investigate everything from Gamelan gong kebyar to Appalachian folk music, returning with his findings for the next phase of hands-on discovery.

Mechanica,​ an improvisation for prepared Dulcitone, focuses upon rhythm and timbre, but the freewheeling melodies Fairhall spontaneously crafts cannot be ignored. Inspired by the tones of the African balafon, the manual indepence of his jazz piano forebears, and the fast repetitive phrases composed by the likes of Terry Riley, but improvised by the likes of Keith Tippett — he finds a meditative middle ground between atonality and tonic rigidity, rhythmic consistency and manual override.

His rendition of the Appalachian folk standard ​Darlin’ Cora​ couldn’t be further in texture from the track which precedes it. Utilising a single reed free-bass accordion, Fairhall begins improvising without a modal centre — his clustered notes sounding almost as if they’re being heard in reverse. His pulsing of the bellows beautifully modulates a passage of warm major chords, before arriving at the time-honoured tune, which his accordion renders quite differently to the banjo and voice of a Roscoe Holcomb or Pete Seeger.

Wooden House,​ the shortest of these musical vignettes, hears Fairhall applying Gamelan motifs to a lightly prepared toy piano, amongst further improvisation. With tape across its tines and its keyboard raised, Fairhall dampens the instrument’s resonance while intensifying its attack, taking its sound closer to that of a wooden idiophone.

Concluding the EP with John Coltrane’s ​Cosmos​, Fairhall pushes the Indian harmonium beyond the confines of its role within Qawwali devotional music, following the lead of Coltrane and his bandmates as he journeys between keys, always sustaining the droning F note beneath.

While Fairhall’s attraction to these unusual keyboard instruments stemmed from his wanting a portable instrument with a characterful sound, that would slot into improv gigs without pilfering the niches of that scene’s modular synth players, percussionists and woodwind players, it has led him to a more profound personal practice. On ​Little Instruments​ — an intriguingly different offering than his 2017 solo piano record, Friendly Ghosts​ — he applies the same keen interest in roots music that guided his path through jazz piano, to the idiosyncratic keyboard instruments on the fringes of our musical cultures. ‘I’d like the audience to be able to hear​ Little Instruments​ as the same mind, the same voice,’ Fairhall concludes, ‘just a different facet of it.’

Over the past decade, Adam Fairhall has forged an international reputation as a jazz pianist and improviser of exceptional versatility. Named as a nod to the ever-present influence of long-gone pianists on his playing, Friendly Ghosts represents Adam’s recorded debut as a solo pianist and continues the synthesis of styles that has long been a feature of his work. ... more

Bandcamp Daily  your guide to the world of Bandcamp